Giants vs. WFT: Will the Offense Show Up?

Washington and the Giants have similar profiles. Both are defense-first teams hoping to get much more out of their offenses.

The Football Team suffered a setback last week in this area, losing quarterback Ryan Fitzpatrick for what appears to be a significant chunk of time. The Giants, on the other hand, laid another dud to open the season. Is Week 2 too early to panic?

One thing we did see from Washington’s defense last week was a higher prevalence of man coverage than they played a year ago. Unfortunately for them, the Chargers had a good plan for beating man, utilizing tight splits, stacks, and bunches. Washington ultimately allowed 14 of 19 conversions on 3rd down, which is where they lost the game.

The Football Team Defense also had trouble getting to the quarterback. A large part of that was L.A.’s approach to the passing game. Another part was the performance of their offensive line, namely rookie left tackle Rashawn Slater. We’ll see if Giants left tackle, Andrew Thomas, can follow up a solid Week 1 performance with Chase Young and Montez Sweat taking turns at him.

That said, we need to see more schematically out of the Giants Offense. Much more.

Jason Garrett’s offense once again looked stale last week. There just weren’t many route concepts that challenged the defense or put defenders in conflict. Garrett, in general, seems to prefer to spread the defense out and have his receivers run routes that really don’t work off of each other. They don’t create traffic or confusion for defenders. That’s a far cry from how the Chargers were able to have success against Washington a week ago.

That will have to change for the Giants to get on track. We need to see more route concepts that put pressure on the defense vertically and attack at each level (3-level stretch concepts).

It’s tough not to expect more of the same from both offenses on Thursday. Anticipate a low-scoring 1980’s-style NFC East defensive struggle. Here’s how these teams match up based on last year’s numbers: 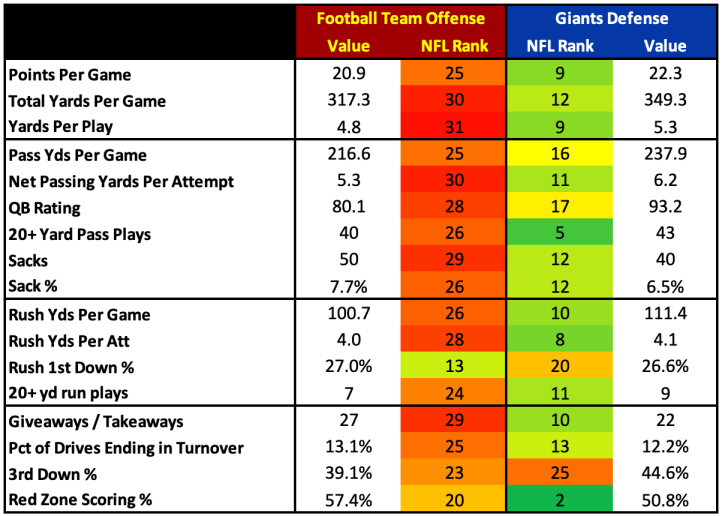