As has become an annual tradition in Green Bay, the Packers once again decided to sit out the offseason. For the 14th consecutive year, their plan is to hope that Aaron Rodgers can carry a mediocre roster to a Super Bowl.

What? We can make jokes.

The interesting thing about jokes, though, is that they’re always rooted somewhat in truth. Green Bay has never gone all in and tried to maximize a championship window during Rodgers’ tenure. This was never more evident than their decision to trade up to select quarterback Jordan Love in the first round of the 2020 NFL Draft after reaching the NFC Championship Game in 2019.

It hasn’t mattered who has been making personnel decisions since 2008. While Rodgers has had some good players around him, it’s pretty eye-opening that the Packers have not drafted a wide receiver in the first round since he arrived in Green Bay. The only first-rounder that has even caught a touchdown pass from him is tight end Marcedes Lewis (Just 4). That speaks volumes about the Packers’ approach to building a team via the draft and free agency.

The closest the Packers came to going all in was 2019 when new GM Brian Gutekunst signed Za’Darius Smith, Preston Smith, and Adrian Amos (in the same offseason!). That wasn’t really a go-all-in situation as much as it was an attempt to quickly fill the holes of a defense that had been hot garbage during the previous three seasons.

Which brings us to the defensive units Rodgers has been supported with throughout his career. Too often, they have been mediocre or just plain bad. In Rodgers’ 13 seasons as the starter, the Packers Defense has finished in the top-10 in scoring just 3 times.

Yes, the quarterback position is the single most important position in football. But rings don’t come without high-performing defenses to complement great quarterbacks. Just look at this chart of some of the best and most productive quarterbacks from the last 40 years. See if you notice a correlation between each player’s Super Bowl appearances/wins and the amount of seasons that their defense finished in the top-10 in scoring:

Rodgers clearly has not had a ton of help in this department, which is largely why you haven’t seen him in more Super Bowls despite performing at such a high level during both the regular season and the playoffs.

Despite the fact that Rodgers has been the best quarterback in the NFL since he became a starter (and possibly the best we’ve seen), he does not have the rings to be acknowledged as such. Whether that’s fair or not, that’s the reality.

Imagine being the best in your profession but not getting the recognition for it because of the organization around you. That’s Aaron Rodgers. And if you think he doesn’t realize that, go watch his July 28th press conference where he voiced his desire to be more involved in personnel decisions. He wants to be utilized as a recruiter for the Packers. The underlying message being: “There is nothing more I can do individually. I need help. Go get some damn players!”

But I digress. Here’s how the Packers finished in 2020 on both sides of the ball: 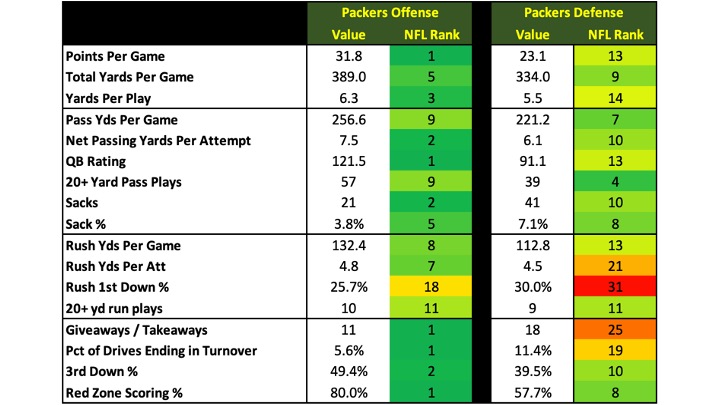 The big question is, are the Packers any better this year? If they are, it will be because players that are already on the roster improve, not because they received much external help.

To give you an idea of their versatility, the Packers ranked 2nd in the NFL on 3rd down, 1st in red zone offense, and 5th against the blitz (going by QB Rating). Each of those are situations where the success of a play is more reliant on a quarterback than scheme. But the Packers also finished 7th in run frequency and yards per attempt, 13th in RPO usage, and 5th in play-action. Defenses couldn’t prepare for just one aspect of Green Bay’s offense each week.

As we wrote multiple times throughout the season, Matt LaFleur’s passing game is heavily schemed. This served the purpose of keeping Rodgers playing within the framework of the offense more frequently, thus leading to a more consistent performance.

The additions of Randall Cobb and rookie Amari Rodgers should enable the Packers to have a complement to Davante Adams and be more effective out of the slot in 2021. My biggest concern, though, is the protection. After finishing as one of the best protection units in 2020, the Packers parted ways with Corey Linsley, one of the best centers in the NFL. And left tackle David Bakhtiari is returning from an ACL tear that occurred late last season.

Those are two key positions where the Packers will have question marks. And that’s a problem for a team that largely had their season come to a halt due to pressure. In their NFC Championship loss to the Buccaneers, Aaron Rodgers was pressured more times than in any playoff game in his career. Often times, the pressure was immediate:

It’s hard to argue that the Packers are in better shape in this department than in 2020.

The same is true of the defense. Linebacker De’Vondre Campbell and first round cornerback Eric Stokes were the only “big splash” acquisitions this offseason. Hopefully for Green Bay, they offer significant talent upgrades.

Schematically, though, I’m not so sure Green Bay improved.

Perhaps I’m wrong. Perhaps the firing of Defensive Coordinator Mike Pettine and the hiring of Joe Barry will be the key maneuver that finally removes the Packers Defense as the biggest impediment to another Lombardi Trophy in Green Bay.

This will be Barry’s 3rd stint as an NFL Defensive Coordinator. His first two opportunities didn’t go all that well. Barry was the Lions Defensive Coordinator from 2007-08. In both of those seasons, Detroit finished dead last in points and yards allowed. He was fired after the Lions made the history books with an 0-16 record in 2008.

Barry did a little better with the Redskins in 2015-16, but they were still a bottom-half-of the league defense in scoring (17th and 19th). They were also 28th in yards allowed in both of those seasons.

Barry’s prior record doesn’t necessarily mean he won’t be able to mold the Packers into something better than they were a year ago. It’s not impossible to imagine that he will have learned from those experiences and return as an improved defensive coordinator. I am not confident that we’ll see drastic upgrades, though.

Who knows what exactly the Packers will look like schematically under Barry. My guess is as good as yours. I’ve heard everything from Tampa-2-reliant due to his days under Monte Kiffin in Tampa, to predominantly single-high due to his days in Washington, to aggressive due to his 3 years under Wade Phillips, to Cover-4 based after last season under Brandon Staley. Whatever Barry decides to do, let’s hope that the Packers can morph into a top-10 scoring defense. If we’re going based off of history, though, the odds aren’t good.

Aaron Rodgers, it looks like it’s on you to carry the team once again…