Buccaneers Return a Better Team in 2021

It’s hard to make the argument that the Buccaneers should not be the Super Bowl favorites entering 2021. After all, they hoisted the Lombardi Trophy last season, were the most talented team in the NFL, and basically everyone from last year’s squad is returning. Familiarity, probably the biggest hurdle for Tampa to overcome, is no longer an issue.

Their numbers from last season paint a picture of a team that sought the big play on both sides of the ball: 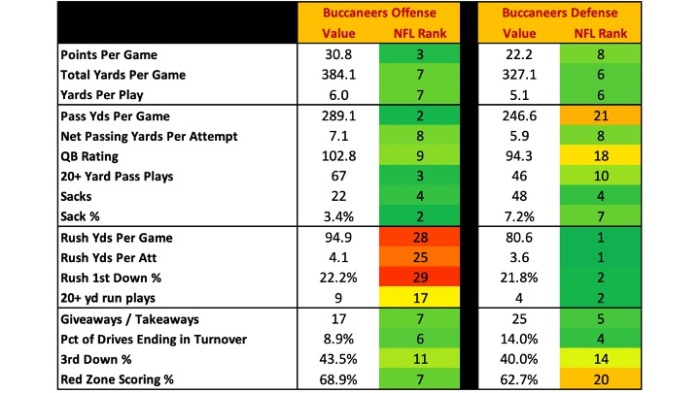 The Buccaneers were good in (almost) every area in 2020. That running game was underwhelming during the regular season. However, the Buccaneers leaned on it during the postseason, going from running the ball 36% of the time (3rd lowest rate in the NFL), to 45% during the playoffs (a top-10 rate).

The Buccaneers also used more play-action during the postseason (29%) than during the regular season (18%), where they again ranked towards the bottom of the league. Both the run game and play-action served the purpose of slowing down the pass rush. Brady was extremely comfortable throughout the postseason. I mean, just look at the time he had on this play in the Super Bowl:

Brady played to a ridiculous 136.0 QB rating in the playoffs on play-action passes as opposed to a 74.8 rating on straight drop backs.

None of this is to say that Tampa will morph into a run-first offense in 2021. But don’t be surprised to see them take a page from their postseason playbook. Leonard Fournette could be featured a lot earlier and more often than he was in 2020.

Also, don’t sleep on the acquisition of Giovani Bernard. He fills the one hole in Tampa’s passing game – a running back who can be utilized out of the backfield as well as in the slot and on the perimter. Similar to how Brady’s backs were utilized in New England, this can help define the coverage and create potential mismatches in key moments.

On the other side of the ball, the Buccaneers have a talented defense that flourished in its second season under Todd Bowles. They get after offenses, and they have the personnel to attack in multiple ways.

They can be aggressive, like they were in their first match up against Green Bay. They can win with their front-4 against lesser offensive lines, like in the Super Bowl where they barely blitzed and were able to pressure Mahomes all night. They can play zone, as they did in that game, or put pressure on an offense with man press and physicality at the line like they did against New Orleans in the playoffs.

Their linebackers (Devin White and Lavonte David) are a unique advantage to Tampa’s defense. Both players are athletic and physical. They’re good enough to blitz, attack the run, and stay on the field in obvious passing situations to lock up even the best tight ends in man coverage. This makes it difficult for offenses to dictate personnel packages and coverages because they always stay on the field. Bowles can play the way he wants to in any situation as a result.

Front to back, Tampa’s defense is talented. This entire team is. It’s easy to think they’ll coast to another Lombardi. And maybe they will. My only concern for Tampa would be health. The Buccaneers went through 2020 mostly unscathed when it came to their starters. That rarely happens two years in a row. If their depth is tested, what type of drop off would we see?

As far as concerns go, you can see from that mini paragraph above (based almost entirely on conjecture), that I don’t have many concerns about Tampa. This team is stacked, and they now have a year of experience of playing with each other.

One big difference in 2021 is that the Buccaneers are now the hunted. Every team in the NFL has been studying them this offseason and drawing up ways to beat them. Repeating as champs in the NFL is difficult for a reason. For Tampa to become the first team to do so in 17 years, they’ll need to be better than they were in 2020. It’s not a reach to think that they will be.