Whether or not Jared Goff can play this weekend, the Rams have a legitimate chance of beating the Seahawks on the strength of their defense. Here’s how these teams match up: 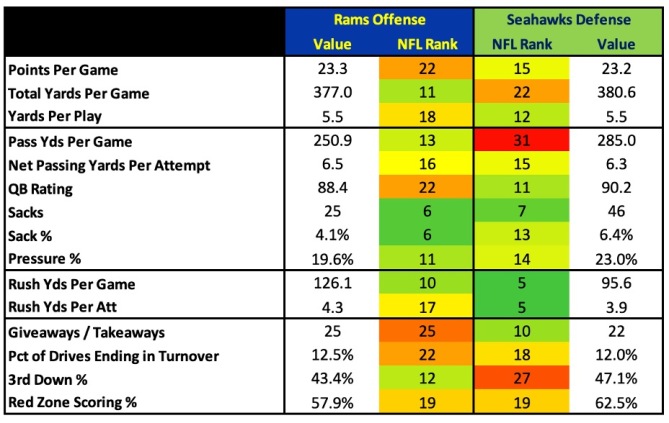 Some of the 11 sacks the Rams got on Russell Wilson this season came as a result of Wilson either not getting rid of the ball, not recognizing blitzes, or moving unnecessarily. That said, many of those sacks came because L.A. was also able to give Seattle’s offensive line problems with inside pressure and stunts, as you can see below.

It’s tough to blame Simmons too much for going with Aaron Donald on that stunt. After all, that’s Aaron freaking Donald. You’re not allowing him to get inside freely if you have a choice.

Also notice that the Rams did a good job of preventing escape lanes by not having their defensive ends rush deeper than Wilson’s drop, as you can see here.

This was an approach we saw the Rams take often against Seattle this season.

Left guard Mike Iupati’s role in this game is critical. The Rams targeted his replacements in Week 10 when he left the game in the 4th quarter and in Week 16 when he didn’t play at all. Below, you can see that they got a sack by bringing a stunt targeting the left side of the offensive line.

Here, they were able to occupy the center and left tackle with their alignment to get Aaron Donald isolated on Iupati’s back-up, Jordan Simmons.

And on this Week 10 play, they were able to force 1-on-1’s across the O-line by bringing a linebacker down over the center, leaving Iupati’s back-up without any help.

If Iupati isn’t at full strength or can’t remain healthy on Sunday, Seattle will have a huge hole inside that the Rams will be able to target.

To read more about this matchup, check out the links below:

Russell Wilson Hasn’t Capitalized on Opportunities vs. Rams this Season
D.K. Metcalf vs. Jalen Ramsey Round 3
Seahawks Defense Has Turned its Season Around