Can the Chiefs Defense Rebound vs. Broncos Running Game?

It’s been two straight weeks of similar game plans that have taken down the Chiefs. Both the Colts and the Texans were able to consistently run the ball, keeping their offenses on the field for 37+ and 39+ minutes respectively. This, of course, limited the damage Patrick Mahomes could do by keeping him on the sidelines.

The bad news for Kansas City is that they will be playing a team in the Broncos that can and will want to take the same approach. Denver has had more success on the ground than through the air this season. They’re 10th in the league in run play percentage and will be looking to feed Phillip Lindsay early and often. The Chiefs Defense has struggled to stop the run in 2019 (30th in rushing yards allowed per game and per attempt), so Denver will likely make them prove they can stop it before deviating from their desired game plan.

Do not be fooled by the records in this one. The Broncos could easily be 4-2 and fighting for first place. They’ve allowed just 42 points in 3 home games so far this season. Mahomes will have to be more precise and on his game against Vic Fangio’s split-safety based defense than he has been in recent weeks if he wants to avoid a third straight loss. 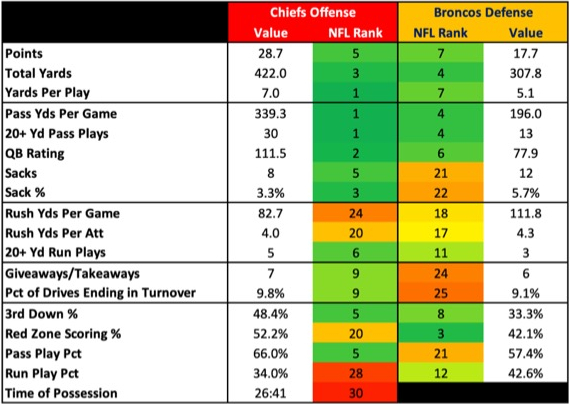