The marquee matchup in this one will be the Rams Offense vs. the Cowboys Defense. These two units are among the best in the NFL. The Cowboys are a very hard team to run against because of their speed and discipline, as the top-ranked Seahawks running game found out a week ago. Sean McVay’s passing game will challenge the Cowboys much more than Seattle’s did, though.

McVay likes to use tight splits and plenty of stack/bunch formations. His route concepts out of these alignments end up putting defenders in conflict, and this leads to open receivers and big plays. The Cowboys play predominant zone coverage, and their second-level defenders are among the league’s best at recognizing and reacting to combination routes, though. This cat-and-mouse game will be an interesting one to watch. The wild card will be how McVay finds ways to utilize Todd Gurley in the passing game against zone coverage. He certainly found ways to effectively attack the Cowboys’ Cover-3 zone with Gurley out of the backfield last season.

Jared Goff had a great 2018 season. When he did struggle, it came from defenses getting inside pressure. Goff was sometimes a bit over-reactive to pressure he could see, and when he was, he locked onto receivers, forced throws, or missed open receivers altogether. Rod Marinelli likes to utilize lots of stunts on the defensive line and inside blitzes with his fast linebackers. Expect to see Dallas bring pressure in Goff’s face to get him to react.

Last week against Seattle, the Cowboys stuck with their running game and wore down the Seahawks. This week, they face another defense that struggles to stop the run. The Rams D ranks dead last in the NFL in rushing yards per attempt. If the Cowboys Defense can keep them in the game, the Cowboys have no excuse not to give the ball to Ezekiel Elliott 25 times.

This doesn’t mean the Cowboys don’t need to make big plays in the passing game. This week, we wrote how Dallas needs to do a better job of stretching the field vertically and putting defenders in conflict to open things up at the intermediate level. In fact, their biggest play of the game through the air against Seattle came on one of these plays. The Cowboys will rely on their running game, but they absolutely need to generate more big plays through the air. They should attempt to do this with some play-action shot plays. 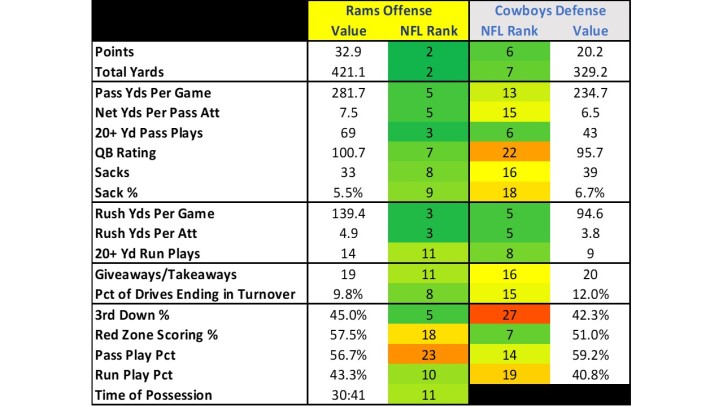 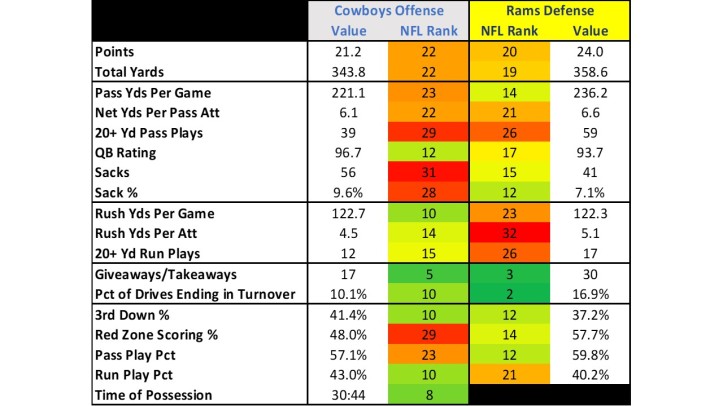