The Chiefs Offense was the best in the league in 2018. The combination of Andy Reid’s schemes and Pat Mahomes’ arm have made defenses have to cover every inch of the field. Mahomes takes this offense to another level with his ability to make big time throws late in the down, after the design of the play has been thwarted.

There isn’t one way to stop the Chiefs’ offensive attack. It takes an all-around team effort to even slow down this group. You have to mix coverages and pressure schemes. You have to use disguise – Show blitz and drop 8, then show blitz the next time and bring it.

The one thing the Colts Defense cannot do is let Mahomes get into a rhythm. They have to force him into play-maker mode by taking away the design of the play. This might seem counter-intuitive given his abilities. However, the few times Mahomes has gotten into trouble this year have been when he tried to make a throw that wasn’t there. The majority of his interceptions came on forced balls downfield, either after the play had broken down or when there was double coverage and Mahomes trusted his arm a little too much.

This was the 4th-down interception Deshaun Watson threw at the end of the 1st quarter on Wild Card Saturday. Before the snap, the Colts showed what looked to be indicators of man coverage. They had linebacker Darius Leonard follow a running back to the perimeter, and cornerback Pierre Desir followed the slot receiver when he motioned across the formation, as illustrated below.

Watson thought he had man coverage, so he targeted his tight end, who was matched on a safety and would be running a quick-out route at the first down marker.

At the snap, Colts slot cornerback Kenny Moore had inside leverage and jammed his receiver. This was, again, selling Watson on the story of man coverage.

Safety Clayton Geathers actually came off the tight end and spied Watson. The linebacker in the middle of the field, Anthony Walker (#50), replaced him on the tight end. This still didn’t eliminate the likelihood of man coverage in Watson’s mind.

Watson stared down his tight end, still thinking he was matched 1-on-1 (now with the linebacker). Slot corner Kenny Moore came off his receiver, though. He, and the rest of the defense, were actually playing zone.

The result was an interception.

This is the type of disguise the Colts will mix in to try and get Mahomes off his game. Again, you can’t expect to completely shut this offense down. But you have to do enough to get Mahomes out of rhythm and then keep him in the pocket. Then you have to score when your offense has the ball.

Last week against Houston, the Colts Offense showed that they can control the line of scrimmage in the running game against a very good defensive line. This will certainly be a part of the Colts’ game-plan against the Chiefs. It’s not rocket science to suggest that one of the best ways to stop Kansas City’s offense is to keep them off the field. It particularly makes sense this week given the physicality of Indy’s offensive line and the Chiefs’ inability to stop the run. KC ranks 27th in the league in rushing yards per game allowed and 31st in yards per attempt.

Defensive End Chris Jones has been Kansas City’s primary play-maker on the D-line. He finished 3rd in the NFL with 15.5 sacks this season. He wins in multiple ways. We’ve seen him win with speed and quickness, but he can bull-rush his way to sacks as well. No matter how he does it, Jones generates inside pressure, which will put Andrew Luck’s pocket-moving skills to the test.

The Chiefs have also consistently gotten to the quarterback with Dee Ford (13 sacks) and Justin Houston (9 sacks). The Colts Offensive Line is tops in the league at protecting the quarterback, but they’ll once again have their hands full against a loaded defensive line.

The same rules as last week still apply, however. If the Chiefs don’t get to Andrew Luck, he will exploit their secondary. 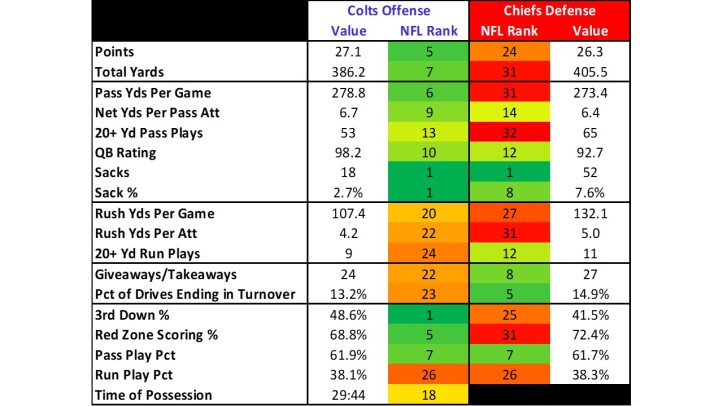