The Bears have the best defense in the NFL. This season, they allowed the fewest points in the league, generated the most takeaways, were #1 against the run, #1 in QB Rating against, and #3 in sacks. Their front-7 is fierce. Their secondary is arguably the best in the league. They also have the complex schemes under Defensive Coordinator Vic Fangio to challenge offenses mentally. The Eagles, on the other hand, have been a one-dimensional offense this season, which will certainly present a problem against Chicago.

The other side of the ball is the wild card in this matchup. We have a tough time seeing Chicago losing this game at home with that defense unless they turn the ball over. Chicago had 24 giveaways this season, which ranked 22nd in the NFL. Mitch Trubisky has shown that he’ll give the opposing defense opportunities to make plays. We don’t think the Bears will come out with a Trent-Dilfer-like approach in this one. But protecting the ball will be the name of the game for Chicago. 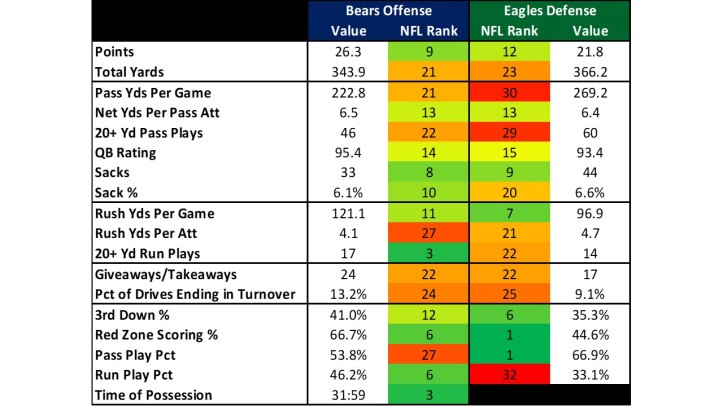