The Colts and Texans split their two matchups this season, with both games decided by 3 points. These division rivals are pretty evenly matched, which means you can easily see this game going in either direction.

This week, we wrote about how the Texans Defense has to get to Andrew Luck to win this game. That won’t be easy against a Colts offensive line that is the best in the NFL at protecting the quarterback. Texans Defensive Coordinator Romeo Crennel will align J.J. Watt and Jadeveon Clowney all over the place to try and generate advantageous matchups, and he’ll bring well-disguised blitzes. If they don’t hit home, though, Houston is vulnerable in the secondary.

On the other side of the ball, Deshaun Watson is one of the bright young stars in this game. He can beat you throwing or with his legs. However, he gets in trouble when he holds the ball too long, and this was a major contributor to his league-high 62 sacks this season. In their previous matchups, the Colts had some success attacking Watson with blitzes that he was late to recognize. Don’t be surprised to see a similar approach by Indy in this one.

Checkout how these teams match up below: 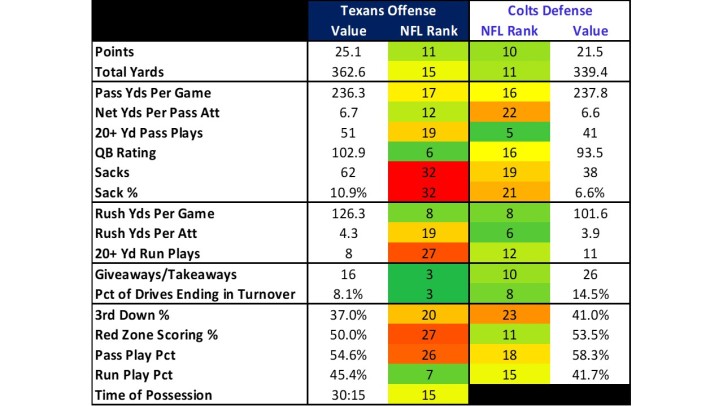