For a team that seems so obsessed with the Patriots, the Steelers rarely ever make adjustments to their approach against New England, at least on defense. This wouldn’t be an issue if not for the fact that the Patriots have dominated the Steelers for more than a decade and a half now.

The Steelers Defense leads the league in sack percentage and ranks 2nd in sacks. They never seem to be able to disrupt Tom Brady and the Patriots Offense because of that quick passing game, though. Brady has traditionally been able to get the ball out of his hands before the Steelers’ blitz schemes have been able to get to him. Combine this with the fact that Pittsburgh loves to play soft coverage behind these pressure schemes, and you have a recipe for disaster that has been plaguing the Steelers against the Patriots for a long time now.

The key to the game for Pittsburgh on this side of the ball is disrupting the timing of the Patriots’ passing game by re-routing receivers at the line of scrimmage. Otherwise, they will not have time to get to Brady. We’ll continue to bang the drum on this until the Steelers finally do it consistently.

On the other side of the ball, the Steelers should have a distinct advantage in the passing game from a personnel perspective. They have two of the most dynamic receivers in the game in Antonio Brown and JuJu Smith-Schuster. And their offensive line is among the league’s best. They have protected Big Ben all year, and the Patriots are among the NFL’s worst at getting to the quarterback.

Roethlisberger likes to take chances and he often gives the defense multiple opportunities to make big plays, though. This has been especially true in recent weeks. Bill Belichick will likely try to challenge Roethlisberger’s impatience. He’ll drop more defenders into coverage, as he generally prefers to do, to take away potential big plays and see if Big Ben can be disciplined enough to take what the defense gives him. It will be interesting to see if Roethlisberger can remain patient and avoid the big mistake in this one. 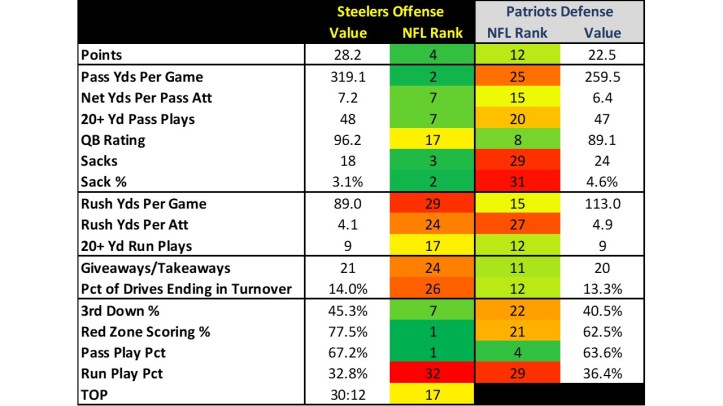