The Chiefs and Chargers might be the two best teams in the AFC. Only one can win the AFC West, though. The Chiefs have the upper hand given their Week 1 victory over the Chargers and a better division record. A win tonight would clinch it.

The Chiefs have arguably the most explosive offense in the NFL. Andy Reid’s schemes and ability to stretch the field in all directions, combined with Pat Mahomes ability to push the ball downfield with tremendous accuracy, have made life difficult for opposing defenses all season. The Chargers have been among the league’s best in defending the pass, however.

The Chargers Offense, on the other hand, is almost as explosive as Kansas City’s. As we wrote last week, Ken Whisenhunt has done a great job of breaking down opposing defenses and generating big plays. And he has the perfect quarterback to be running this style of offense. Philip Rivers loves attacking downfield, and he’ll hang in the pocket until the last moment to make big plays happen.

The Chiefs have shown the ability to get to the quarterback. They have given up the most 20+ yard pass plays in the NFL, however. If the Chargers can give Rivers that extra split-second of time to throw, he should be able to find some big plays downfield. 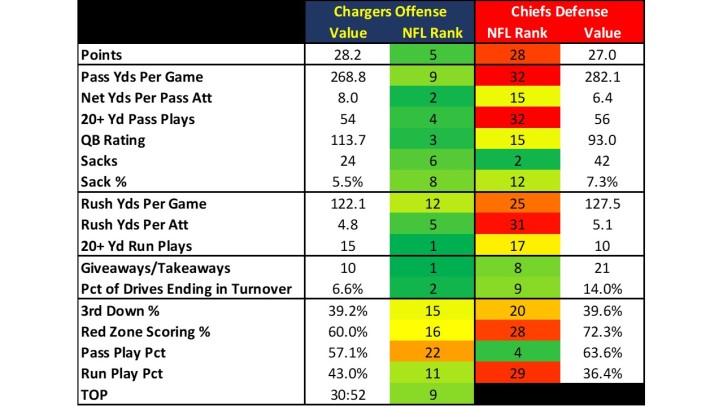